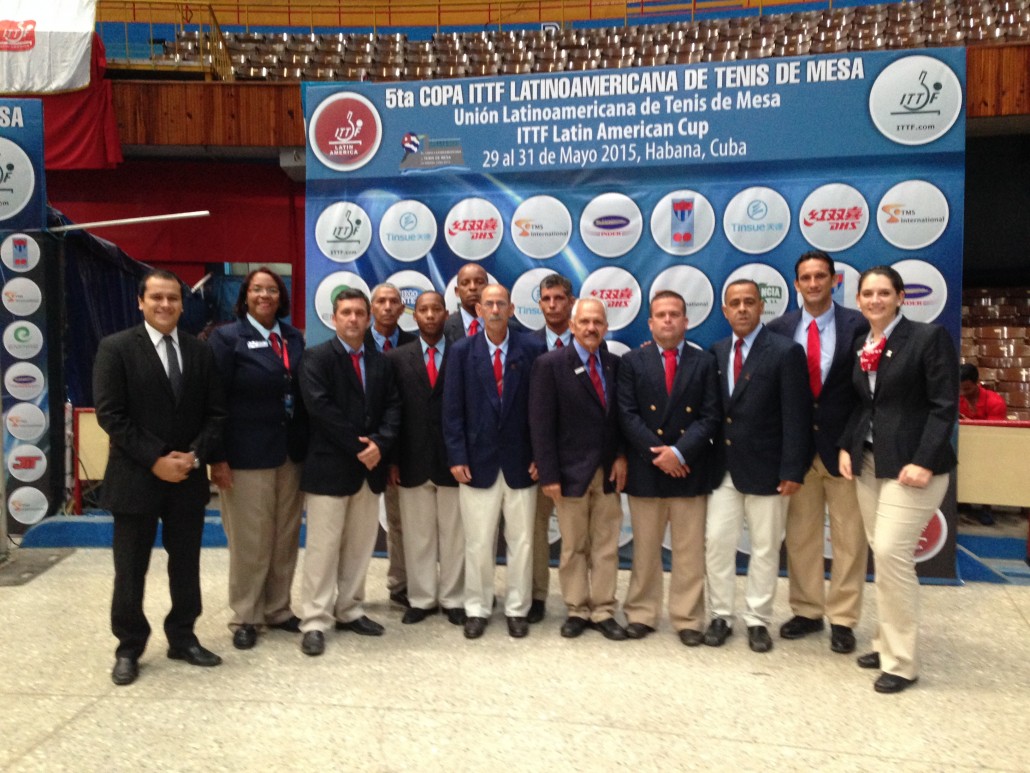 The 5th ITTF Latin American Cup was held in Habana, Cuba from the 29th to the 31st of May 2015. It was for Ingrid a great opportunity to be able to attend this event as an international umpire.

This international tournament invited the best 12 female and 12 male players of Latin America to compete for the ITTF Latin American Cup. Silvia Garros was the referee and Freddy Almendariz, ITTF Competition Manager. Ingrid was given the opportunity to work as a deputy referee together with Frank Andul from Cuba.

There were eight umpires from Cuba and one from the Dominican Republic. They worked together as a team to accomplish the success of this international event which was completely televised.

Thomas Weikert (GER), the current ITTF president, was also present (see picture). Ingrid made sure to use this opportunity to speak with him and tell him about the achievements in Curacao.

As a deputy referee of the tournament Ingrid had to oversee the work of the umpires in the Call Area. The players came to this designated area to have their rackets inspected, the umpires used instruments to verify flatness and thickness of the racket coverings. Additionally, they had to check the color of the players’ shirts and numbers, and complete the score sheets before the players moved onto the playing area.

Another task was to make sure that the correct protocol was followed when the umpires and players were presented and entered the playing area. This was especially important, because the event was televised and broadcast in several countries around the world.

The most important part of being a deputy referee was to solve any problems that might occur and to make sure that all rules were correctly interpreted, so that the tournament could proceed smoothly.

The 5th ITTF Latin American Cup was a Singles only event. The seeding list of the 24 individual players was based on May 2014 world ranking. The first stage of the competition consisted of 4 groups, each made up of 3 players. The second stage was a Knock out stage. The format for both stages was best of 7.

Ingrid was fortunate enough to be permitted to attend all the draws with the delegates. Besides attending the draws, she also helped choose the tournament’s best umpires to lead the finals based on their overall performance.

They concluded the tournament with a beautifully organized award ceremony, in which the winners were handed their trophy and prize money.

From the final results it is evident that Brazil dominated throughout the competition.

Ingrid would like to thank everyone who made it possible for her to participate as an official in the ITTF Latin American Cup 2015. It was truly a remarkable experience.

Henny Metry won the FTMK cup and has strengthen his position as the number 1...
Scroll to top