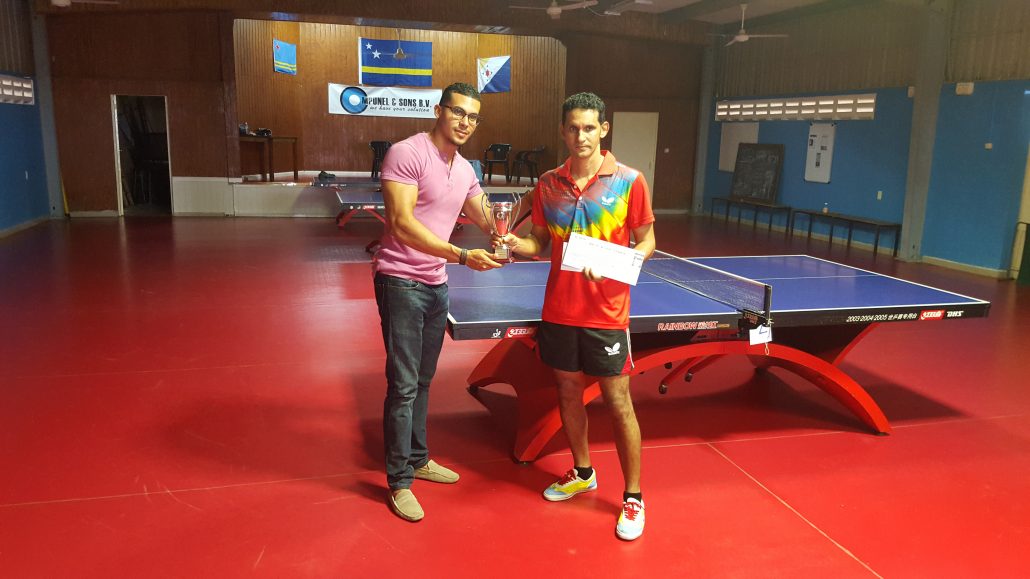 During the weekend 28/29 of May the company Compunel & Sons has sponsored a tournament in cooperation with the federation, in which cash prices were in the game. The winner will get Fl. 250,-, while the first runner up will receive Fl. 150,= and the two second runner-ups Fl. 50,= each. Besides these there were too trophy’s for the finalists.

In order to give this tournament an international character and also more alluring, the federation did invite the 2 best players from Aruba and the 2 best from Bonaire as well. From Aruba these were Mario Lobo and Andy Gomes and Almar Nicolaas and Jean Claude Clementine came to represent Bonaire. With the presence of these mentioned Arubian players, they became right away one of the favorites to cash in the biggest prices. Mario Lobo is a 24 times Arubian champion and has been in the past together his team mate Andy Gomez one of the best master couple in the Caribbean.

Curaçao came up with 8 of his best players and so the tournament has started on Saturday with the 12 players placed in 4 groups 3 players each. The best 2 of each group will pass for the final matches the next day.

On Saturday there were no surprises. Only to be mentioned that in one of the group Mario Lobo had to play Dimitri Leon, which was the best outing of the day, where Mario Lobo had to fight his way out to win this match 3-2. Dimitri came in good shape and it was quite obvious that he was not going to give in anything and was determined to play the big final. The players from Bonaire did not make the quarter finals.

On Sunday Dimitri started to put aside the no 1 seeded Devon Meilink 3-0, while in the other 3 quarter finals the scores were as follow:

The semi finals became very interesting as Aruba was represented in both legs, which could have resulted in an Arubian final. But Dimitri was determined and won off Andy Gomes 3-1, while Mario Lobo won off Michael Dalnoot 3-1 as well.

There was a big expectation for the final as everybody still remembered their confrontation a day before. This final was a best of seven one. After a strong start of Mario, whereby he took an easy 20 lead, Dimitri came back strong and tied the game in set at 2-2. In the 5th set Dimitri got injured, which was almost the end of the match. However Dimitri came back after this anxious moment. He lost admittedly this set, but fought his way back to tie it again 3-3. At last Mario showed the attendance, why he is one of the best in this region and won the title, winning this final match 4-3.

Everybody was at the end very enthusiastic how everything had gone and a word of gratitude went to the sponsor Compunel & Sons, hoping we will have more of this kind of event.