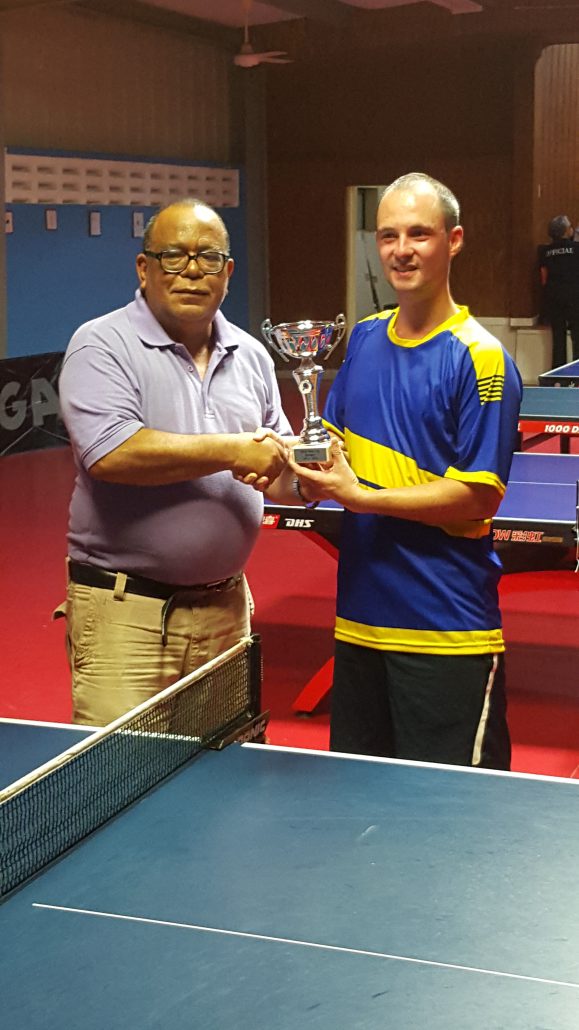 Last Tuesday the finals were played in the Oscar Salas tournament, which is the main event presented by the federation in the month of April. This tournament is held for years in honor of the past Oscar Salas who was president of this federation in the years 60. Together with his wife Lulu they have meant a lot for the table tennis in Curacao. Tonight it is the turn of the Lulu Salas Tournament, a Women Single event.

As the Oscar Salas tournament was split over 2 nights, due to the high amount of inscriptions. 20 players started on Tuesday April 12th with the preliminary games, whereby the best 8 proceeded to the final games the following week. There were some interesting games, among them the semi final match between Devon Meilink, who is possessing the national title 2015 against Henny Metri the MVP of last year. Devon started strong defending very well against the attacks of Henny and went in front 2-0. But Henny came back and tied the game at 2-2. It was obvious that it was a too high demand for Henny as he could not hold the momentum and lost finally 3-2. In the final Devon got an opponent, who since Devon has joint the local table tennis, has given him a lot of problem. Dimitri Leon, a former local champion during some straight years a couple of years ago, lefthander just like Devon, should have played better to make chance this time. Devon walls over Dimitri 4-1, easier than expected.

In the VETS 50+ Begina the best